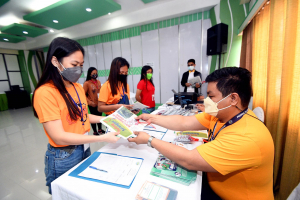 GENERAL SANTOS CITY (January 25, 2022) – Nilong Ibrahim (right), Sulong Karunungan staff, hands over a seminar kit to Thea Dizon (extreme left), 16, from Barangay Maribulan, Alabel during the Youth Action for Environment: Climate Change and Disaster Risk Reduction and Management seminar on January 19. The activity aims to capacitate and upskill the Sarangan youth regarding the provincial disaster risk reduction plan particularly in alleviating and controlling the impact of disaster in the community to attain its end, and to achieve a resilient and progressive province. John Oliver Tablazon, Sarangani’s provincial youth development officer-designate, said “we want our youth from all of our municipalities na malaman kung ano ang laman nitong disaster risk reduction plan at kung ano yung current situation ng ating environment dito sa Sarangani." Tablazon also explained that part of the topics to be discussed are the different human activities, which he emphasized as "mostly done by the young individuals," that cause too much in the totality of the climate change effects in the province. The said activity is one of the visions of Governor Steve Chiongbian Solon which is focused on equipping the youth to be the province’s partners as stewards in protecting the environment. The activity was conducted from January 19 to 22 and was attended by some cluster heads of the different municipal youth development councils of Sarangani. (Jake Narte-Joshua John Pantonial/SARANGANI PROVINCIAL INFORMATION OFFICE) MAITUM, Sarangani (January 25, 2022) – Rhowell Matias “Bornok” Mangosong IV, a national motocross champion, competes in the 15th Bangsi Festival Moto Enduro Competition on January 24 held at the Mayor Bryan Reganit (MBR) Enduro Park in Barangay Sison. Mangosong bagged the championship title in the Enduro King Power Enduro Category and took home P100,000. Mangosong is known for winning several local and national motocross competitions around the country. The Moto Enduro Competition involves challenging routes and terrains, both uphill and downhill that vary in steepness, length, and difficulty depending on the location. It is one of the highlights of the 15th Bangsi Festival which runs on January 24-28. (Martin Fernando Bernad Jr. – Jori Mae Samillano/SARANGANI PROVINCIAL INFORMATION OFFICE) GENERAL SANTOS CITY (January 18, 2022) – To come up with an integrated watershed management plan, the United States Agency for International Development (USAID) Safe Water project conducts a two-day workshop on the data collection and initial analysis on Sarangani’s water security on January 12 to 13. The activity was attended by the provincial technical working group including some department heads, focal persons and officials. Assistant Provincial Administrator for Operations Engr. Gerald Faciol said “the importance of this is we will come up with an integrated watershed management plan because we don’t have this yet in the province and we know that everything revolves around water." He also disclosed that in the areas of Glan, Malapatan, Alabel, Malungon and Maasim, "we are already experiencing a shortage of water supply.” Rachel Beja, USAID-Safe Water Security Advisor updated that the activity is “already the 5th phase” of the water security planning process and the security assessment of the province. She disclosed that Sarangani was among to receive the technical assistance from USAID because “Sarangani has been recognized on several occasions for it has already several issues on the deterioration of its water resources." Faciol also urged all the Sarangans to take part in the water conservation of the province. (Joshua John Pantonial/SARANGANI PROVINCIAL INFORMATION OFFICE) 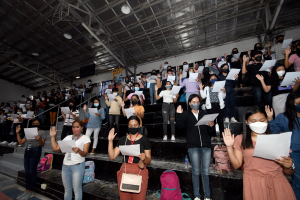 On January 12 during an orientation and oath-taking ceremony spearheaded by Glenda Revaño, PPSS scholarship program coordinator, she said that aside from helping the less fortunate students, “to produce excellent and globally competitive scholars” are among the program’s visions.

The new scholars were selected after passing the qualification requirements including an evaluation, academic ranking, and an interview.

These scholars belong to the marginalized and depressed families in Sarangani who have the eagerness to pursue their studies and excel in their selected fields.

For the school year 2021-2022, about 800 entrants underwent the series of qualification processes.

Revaño told the scholars “you are so lucky to have been selected from among the 800 applicants who tried their fate to be part of this program.”

She added, “kailangan niyong pagbutihin ang inyong pag-aaral because you are one of the few who are privileged to enjoy the scholarship.”

A cash assistance worth P2,000 is given monthly to each of the scholars for one semester. Revaño emphasized,”para mapagpatuloy nila itong scholarship, they have to maintain an average grade of 80% every semester.”

“All-in-all,” Revaño said, “each of our scholars will be receiving P20,000 for one school year,” which she pointed out as “malaking bagay na" in "assisting the students in their school fees."

PPSS is a flagship program under Governor Steve Chiongbian Solon’s Sulong Karunungan which is committed to provide better education opportunities to the Sarangan youth.

The activity was attended by Vice Governor Elmer De Peralta, Board Members Russel Jamora, Joseph Calanao, Irish Louie Arnado-Beñola, Corazon Grafilo and Jess Bascuña who each gave their messages by encouraging the scholars.

In his message, De Peralta said, “always dream big and never be afraid of turning it into reality.”

“As you make every step of the way, never forget to always put God at the center of it,” he added.

He also stressed that the legislative body will always include education among the province's top priorities.

Through the collaboration of Governor Solon, Vice Governor De Peralta, Deputy Speaker Congressman Rogelio Pacquiao with the full support of all the Sangguniang Panlalawigan members, the PPSS scholarship program will continue its gains considering the impact it brings to the lives of the Sarangans and the entire province.

As of the writing, PPSS has produced some medical doctors who are currently working in two of the province-run hospitals in Sarangani; a school principal and several teachers. (Joshua John S. Pantonial/SARANGANI PROVINCIAL INFORMATION OFFICE) ALABEL, Sarangani (January 14 2022) – Some of the 241 newly-qualified scholars of the Paaral Para Sa Sarangan (PPSS) scholarship program received their allowance on January 12 at the Capitol gym. The ceremonial turnover was led by (from left) Glenda Revaño, PPSS scholarship program coordinator, Sangguniang Panlalawigan members Corazon Grafilo, Irish Louie Arnado, and Joseph Calanao (extreme right). The new scholars were selected after passing the qualification requirements including an evaluation, academic ranking, and an interview. These scholars belong to the marginalized and depressed families in Sarangani who have the eagerness to pursue their studies and excel in their selected fields. Each PPSS scholar will receive a monthly allowance amounting to P2,000 or a total of P20,000 for the entire school year. (Jake Narte-Jori Mae Samillano/SARANGANI PROVINCIAL INFORMATION OFFICE) 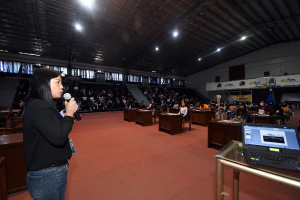 ALABEL, Sarangani (January 14, 2022) – Glenda Revaño, PPSS scholarship program coordinator, oversees the orientation of the Paaral Para Sa Sarangan (PPSS) scholarship program to its newly-qualified scholars on January 12 at the Capitol gym. Revaño further explained to the 241 scholars the policies of PPSS and presented the goal, history, and the successful products of the program. Revaño emphasized the importance of not wasting the opportunity given to the students to have access to education. The PPSS is under the flagship program of Governor Steve Chiongbian Solon’s Sulong Karunungan that is committed to provide better education opportunities to the Sarangan youth particularly those who belong to marginalized and depressed communities. (Jake Narte-Jori Mae Samillano/SARANGANI PROVINCIAL INFORMATION OFFICE) MALAPATAN, Sarangani (January 14, 2022) – Sadyandi, a traditional justice system of the indigenous people in peace-making and resolving conflicts, is still alive and being continually practiced by the Lumads in barangay Sapu Masla in Malapatan.

On January 6, a sadyandi was held at the barangay gymnasium where tribal elders and leaders of the municipality gathered to assist in the settlement of a dispute between the families of Salutan, the complainant; and Go, the defendant.

According to Fulung Titus Mandalo, municipal indigenous people’s mandatory representative (IPMR), the conflict started when the two parties exchanged gunshots due to a misunderstanding. The elders then called for the settlement of the people involved.

ALABEL, Sarangani (January 14, 2022) – The provincial government, thru its health office, continues to address malnutrition in the province through food security programs and constant delivery of essential health and nutrition services to communities with malnourished children under five years old. ALABEL, Sarangani (January 13, 2022) – Josephine Alog (extreme right), Human Resources Management & Development Office officer-in-charge, and Provincial Administrator Mariter Sayson (extreme left), lead the awarding ceremony for the five staff of the Provincial Vice Governor’s Office on December 27 at the Capitol lobby. According to Alog, the ceremony is a “simple act of recognizing the staff of the PVGO who are behind the project of BLITS in which for the first time nila sumali, spearheaded by DICT, naging national champion sila.” The Barangay Legislative Information Tracking System (BLITS) instituted by the Office of Vice Governor Elmer T. De Peralta was recently acclaimed as the national champion provincial level for having garnered the “Best in Government Internal Process” during the Digital Governance Award (DGA) 2021. “It’s a good start that we are recognizing the endeavors of our provincial employees so that they will be inspired to do more in the future,” Alog added. (Martin Fernando Bernad Jr.-Jori Mae Samillano/SARANGANI PROVINCIAL INFORMATION OFFICE)